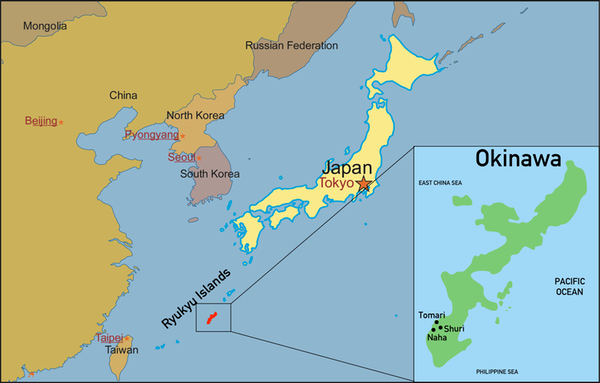 Okinawa is the largest and principal island of the Ryukyu islands. Okinawa is approximately 400 miles south of Japan and 400 miles off the coast of China.

Prior to the 14th century, the people of Okinawa largely lived a rural, agrarian life. Okinawa’s location between Japan and China and the severe weather that often swept across the nearby seas ensured a stream of sailors seeking a safe harbor from storms or who had been shipwrecked. Its proximity to Japan and China also saw to it that over the years both cultures interacted with the early Okinawans as they explored overseas.

Early authority was exercised by two primary officials: the local chieftains (anji),  and female priestesses (noro). In the 14th century, three anji consolidated their authority over the other anji creating three competing “kingdoms” on Okinawa: Hokuzan in the north, Chuzan in the center, and Nanzan in the south.

Okinawa has little in the way of natural resources. This led to limited natural wealth or items of value to trade with its neighbors. During this period the port of Naha in Chuzan began to become an important port for maritime trade. Recognizing the value of this, the king of Chuzan in Shuri sought to increase the opportunities for trade with China by accepting tributary status with the Chinese empire. This also brought recognition by the Chinese emperor of the king in Chuzan as king of Ryukyu. This trade brought needed wealth to the island and contact with the cultures and people of southeast Asia.

In 1392 the Chinese emperor sent 36 families of tradesmen and scholars to settle in Okinawa. These families took prominent rolls in trade and at court in Chuzan, strengthening ties with China. These families remained an important link with China for trade, diplomacy, and martial arts for 500 years.

In 1407 an anji named Hashi came to power as king in Chuzan. In 1422 he conquered Hokuzan in the north. In 1429 he conquered Nanzan in the south, uniting Okinawa under one ruler.

In 1477, 14-year-old Sho Shin became king and inaugurated the longest and most prosperous reign in the history of Okinawa. In 1507, to mark the 30th year of his reign, a monument was erected on the palace grounds on which was described the 11 distinctions of the age. One of these distinctions was that private ownership and use of arms was done away with.

These conditions, local rule by the king in Shuri, all weapons under control of the king, and tributary status and the ensuing connections with China, prevailed through the remainder of the 15th century. All this changed in 1609.

At the turn of the century Japan went through a bitter succession dispute. On the losing side was the powerful Satsuma clan in southern Japan. With the refusal of the Ryukyu king to formally submit himself to the new Shogun , the new Shogun found a convenient (and free to him) release to the pent up frustration of the samurai of the vanquished Satsuma clan and create a buffer against the rapidly encroaching Europeans. In 1606 he authorized the Satsuma to chastise the Okinawans for their want of respect.

In February of 1609, 3000 Satsuma warriors sailed for Okinawa. Landing in northern Okinawa they were met with brief but stiff resistance. However, the untrained and inexperienced Okinawans were no match for the battle hardened samurai and by April, Okinawa was under Satsuma control.

The next 300 years saw the Kingdom of Ryukyu continue in a state of moral obligation to China and political and economic obligation to Japan as the King continued to rule an officially independent kingdom in Shuri, maintaining tributary status with China, but always under the careful observation and guidance of the Satsuma clan.

In 1879 the Meiji government in Japan abolished the independent but wholly subordinate status of the Kingdom of Ryukyu and reorganized it as the Okinawa Prefecture under direct Japanese control.