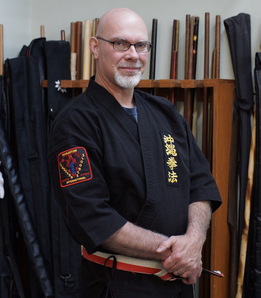 Shihan Pelletier passed away on March 31, 2013 after a 13 year battle with brain cancer.

Shihan Sadie Landry is a 7th degree black belt who has been teaching martial arts and fitness for over 20 years. She has her 200 hour Yoga Teacher Certification from the ShivaShakti School of Yoga and Healing Arts in Rockland, ME, and is a RYT® (Registered Yoga Teacher) with the Yoga Alliance and is certified in Thai Body Massage. Shihan Sadie resides in Lewiston with her husband Jay and her daughters, Cecilia and Fiona, and her son, Rocco.

Sensei Michael Bourget is a 5th degree black belt who has been studying martial arts for over 25 years. He studied Shotokan under Sensei John Jenkins for eight years and studied with Shihan Pelletier starting in 1995. Mike has studied several styles and systems including grappling and joint locks and manipulations. Mike says, "There will never be enough time to study or learn everything, just keep plugging away and someday you will get it."

Sensei Per Almquist is a 4th degree black belt who has been with Pelletier's for 15 years. He leads the adult program. His three sons are all black belts who began their studies under Shihan Pelletier. Sensei Almquist is the pastor of Free Grace Presbyterian Church in Lewiston.